Why a Honda Innova?

Why this crappy looking bike?

Most peple think I’m crazy for planning to travel through the Middle East. Even more so when they see the Honda Innova. I always get asked why I do not do this trip on a better bike. I love this question because I ask them to define “better”. Obviously a bigger, more powerful and newer bike is more comfortable, but the Innova has only advantages when it comes to trips like this. 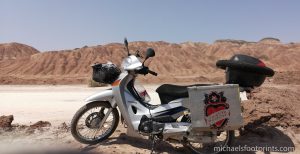 It doesn’t look expensive
which minimizes the chance of it getting stolen. I will even made it look worse by putting stickers on mine and scratching them.

It isn’t expensive
which means I can afford it.

It is one of the most sold vehicles in the world
making it easy to find spare parts. And many mechanics can fix it. Except in Switzerland where Nobody drives them.

It has a kick-starter
which means I’m not stuck in the middle of the desert if the battery is empty.

It has a big shifting system
that allows me to wear big boots and still shift with ease. Indonesians prove that flip flops work too 🙂

It has a ridiculously low gas consumption
averaging at about 1.5 liters to 100km. (150 miles per gallon)

The clear disadvantage is the top speed of 80km/h or 50mph. I always say that in many places this doesn’t matter as the streets don’t make faster travel possible in the first place. While this is true for SE-Asia I’m pretty sure this will not be the case for most places in my Overland ’18 trip.

I have a lot left to do on the bike, like attaching metal boxes to the side. I will keep you informed as I wind out how to do this cheaply. Stay tuned!