After diving in Komodo National Park in Indonesia there is certainly no better way to spend the no-fly time, than to visit the Komodo Dragons – The biggest lizzards alive.

How these tours usually go

Labuan Bajo on the island Flores serves as the hub for the National Park. After leaving from here the boats take you to Rinca Island. This is closer than Komodo Island and the chances of seeing the dragons is much better (or so I am told). The walk is usually very short and does not leave the prepared path. The best chance of seeing a dragon is in the small village, where the walk begins. Right next to the kitchen – don’t worry you’ll find it. Even Dragons like free meals. After this walk which you could do in flip flops and a bathing suit you go back to Bajo stopping on the way for snorkeling. 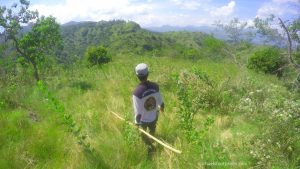 How our tour went

Having just spent a week diving the best spots Komodo has to offer, I had no interest in snorkeling some lame spot. Another diver who had been on the live aboard with me thought the same. So we headed to the tour shops (which are everywhere in Bajo) and tried to get someone to take us to the island for the full day. After a few tries we got an offer. The problem is you need your own boat, because you will be coming back later than everyone else, because they would have already left the island for snorkeling.

So the next day we headed out to the docks and boarded a fishing ship. It was a long but beautiful ride. Two things were the same here as they always are in Indo. First of all the sound of the motor was deafening, so I was glad to have ear plugs which I usually have for the Asian buses, where loud music from crappy speakers can seriously ruin your day (No joke, louder than any disco in Europe). The second thing that is always nice to see is that too many people get hired. There were four locals on the boat getting a salary from us – only one was driving. And we weren’t paying much. It would seem that the boat owner says that they will rent the boat if his nephew gets hired and so on. 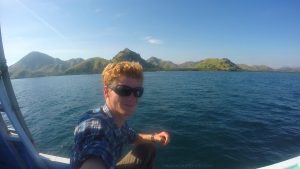 When you arrive at the park you have to get a ranger. They stand around the piers and you have to bargain a price with them. The fact that our guide was surprised we wanted a full day package should have been a hint to us.

This island was by far the hottest I had experienced in Indo, it was quite brutal compared to the usually mild climate in Indonesia. It turns out that your chances of seeing Dragons during the days hottest period is basically zero. On the other hand the island is always beautiful with a real Jurassic park feel. And we went right through all off it off of the paths. We saw a whole heard of wild water buffalo and some deer. Not to mention bones from the animals the Dragons had hunted in the last few weeks. 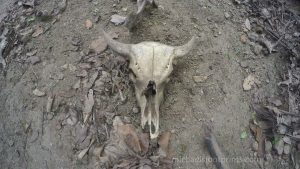 The guides have sticks with them as defense from the Dragons – and yes he dragons are dangerous and regularly kill locals with their poisonous and bacteria infested bite. It’s a slow death. The Dragons bite Buffalo and shadow them for days before they die. As the climate cooled down in the afternoon we eventually found a Dragon digging a nest. 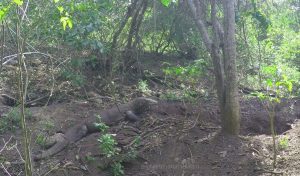 When our tour guide got very close to the dragon I felt perfectly comfortable standing right behind him. Less because of the stick than the human shield – needless to say. And here’s another Indo classic. I turned around to talk to my Aussie companion. The next time I turned around the guide had moved along and there I was next to the Dragon. This delivered one of my favorite Indo pictures. The wide angle view of the gopro makes the dragon seem much smaller and further away – which is great when showing mom your pictures from the trip. And by the way, the Dragons are fast sprinters over the first few meters. 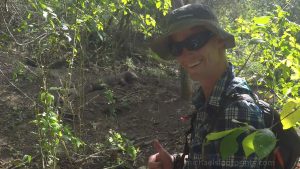 Walking through the bush all day long was a great experience and I can really recommend it to slightly athletic people. As we completely left the prepared paths and headed through the bush, I never regretted having long clothes on. The Aussie with me was a bit jealous. 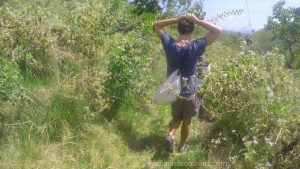