Flores is a beautiful island in the Indonesian archipelago. I enjoyed backpacking my way across the island and fell in love with the lush green landscapes and vast jungle. The real charm of this island did not lie in the typical highlights, but more in the amazing atmosphere and the laid back way of life: The tiny buses full of rice bags to sit on, that the driver would drop off in towns under designated trees that served as the post office, the scooters that didn’t have working lights and the soldiers clearing up the earth slides in pink rain boots. 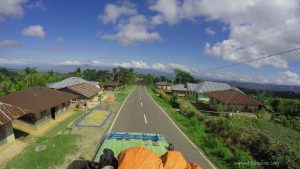 View from on top of a bus.

My trip started off in Maumere in the east of Flores. For the first part of the island I got myself a driver instead of taking a bus, because I wanted to catch up with friends I had met on another island. We all had the same idea of backpacking our way to Komodo National Park for the diving and to visit the Dragons. But being driven around was by far the worst part of my trip. This was backpacking paradise and I had to spend a whole day flying past all the landscapes with a driver who was not very agreeable. And plus it would not stop raining during the first two days, so I missed out on the famous volcano lakes on Gunung Kelimutu. I had really been looking forward to seeing them… but hey – that’s travelling. And there was plenty more to see on Flores.

Once I had gotten past Ende the rain finally stopped. I was not there during rainy season, but it had poured down so heavily that whole earth slides covered the streets. Luckily no rain had been seen east of Ende for some time, so the roads were in good condition as of here. Besides the occasional pot hole.

As mentioned the known sights of Flores were not the best part of this trip, but none the less, here are two sights worth visiting.

In 2003 remains of a very small human were found. Debates continue until today if this was a newly discovered hominid species commonly called “Homo floresiensis”.
What is clear is that it’s a special place to visit. When we arrived the place was actually locked down, but when the locals saw tourists wanting to get in, somebody came along with the keys for the gate. 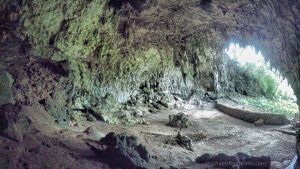 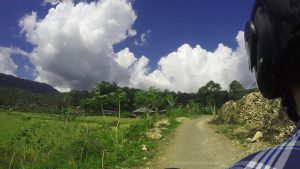 What was almost even better than the cave itself was the ride there on scooters we had rented in Ruteng.

These fields known for their distinctive shape are in a town called Cancar. In order to get to the view point you’ll have to fork over a few dollars to some people who believe they own the place. Maybe you can go up somewhere else if you put some thought into it – I didn’t.

A note on tourism

Although Flores seems quite touristy on the internet, it is quite off the beaten path. Basically no locals spoke a European language. When I drove past schools all the kids would come running and waving yelling “hello mister” or even “hello bule”, which they say means “hello tourist”, but I think it means “white person”. To experience the most hospitable people be sure to leave the “highway” and take some small roads like the one leading to the hobbit cave.
In the cities the people are a bit less agreeable, even a bit rude. I only slept in the cities but spent my whole day out in the towns of Flores.

A surprising experience
Once when I had finally found the bus stop at 7 o’clock in the morning (it’s always good to be there early) I tried to ask the locals, who were also waiting, when the bus was to be expected. So basically “when bus?”
The look they gave me made it quite clear that they didn’t understand me.
So I tried hand signs. I made the typical symbol for watch (index finger and thumb shaping a ring on my left wrist) and the sign for driving (holding and turning an imaginary steering wheel).
Then they all started looking at my wrist. Until I noticed that none of them had watches and probably never did – so this hand sign, which I had considered universal, was completely unknown to them.

Then they waved a man my age to them. He spoke basic English, but also did not know when the buses would be leaving. So he asked the people who were waiting with me. The answer: “oh, maybe 12”

A private bus showed up before a real local bus. They are slightly bigger (still tiny) and have horribly loud music running. But they let you sit on top, which the local buses didn’t. As they hardly drive faster than a bicycle it seemed safe enough to continue backpacking like this. 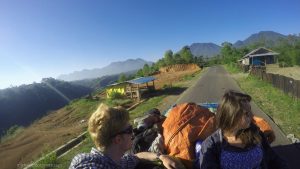 I spend a whole day on top of this bus with the friends I met up with. The beautiful landscapes of Flores are best enjoyed from here.

While backpacking Flores happened to walk past a big gathering of people. Out of curiosity I went to check out what all the fuss was about. At first I got some suspicious stares and I started to wonder if I was supposed to be here. Then all of a sudden some people signaled I should come to them.

It turned out to be hundreds of locals gathered up to watch the young men from the surrounding towns do traditional fights. Two fighters would meet each other in the middle of a big field and each of them would have one or two older men holding them by the belt. Then they would start hitting each other with a palm sized object that I could not identify. I would later find out what it was.

In any case the fight did not seem to interest the locals half as much me being there, the tall red headed tourist. I had hardly watched the fight for five minutes before I got dragged to the chief. He was quite old and sitting on a chair under a big sun shade surrounded by other older men. Everyone else was standing. One man was made to stand up so I could sit next to the chief. I felt horrible, but the crowd basically pushed me into the seat. They also got the only local who could speak English to sit next to me to translate. Which meant a second important, old person had to stand up. I felt touched and ashamed at the same time. 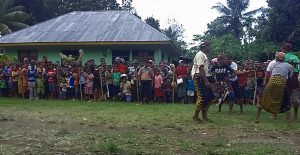 I made a few pictures with my cell phone as taking out a bigger camera felt a bit weird in this setting. Hence the poor quality of this image.

The man next to me explained what they were hitting each other with. Glass shards in sand, wrapped up in an olive leaf and tied shut with some string.

The men holding their belts were there to pull the fighters apart if it was to get to brutal. The fights never ended to badly though, as usually one good hit would make a victory by submission.

Then I was asked if I wanted to fight. I took everything I had to decline, as I really would have loved to experience this tradition first hand. But I simply didn’t want to be the tourist who missed out on diving because of a stupid injury and I also didn’t want to be the visitor who beat up a local.

One morning we had all cramped ourselves into one of the minibuses. Seats were shared and many people were sitting on the floor… typical backpacking on Flores. The driver had finally decided it was time to go and we were all very happy to get on our way. But then the minivan wouldn’t start. So all the men started getting out and signaled me to join them. We then pushed the car about 50 meters until it jumped to life. Then we all had to jump and grab the roof rack, because the driver figured he did not want to stop for us. Maybe out of false fear the van would die on him in a still stand. Then we climbed back to the doorframe on the side of the bus, entered, and cramped ourselves back into our seats once more. I say doorframe, because there was no door at all.

Labuan Bajo
The trip ended in Labuan Bajo which is a very touristy town, as it serves as the entry point to Komodo National park and the hub for all the diving. If you have a craving for some European food be sure to visit “Made in Italy”. They make pizzas just as well as Italians (I have been to Italy many times). A nice change after two months of Indonesian food.

Flores is an amazing island with a beautiful atmosphere. Probably the most relaxed island I visited that was big enough to have actual streets. Calculate enough time when backpacking here. It is big land to cover and the buses are very slow when they eventually get rolling. 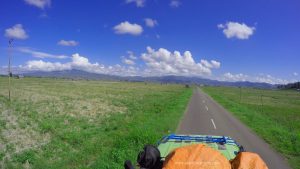 The landscape got drier the closer we got to Labuan Bajo. Our backpacking trip was reaching it’s end in this picture.