Dubai is well known for beautiful skyscrapers and big malls.
The tallest, and most known building is undoubtedly the Burj Khalifa. 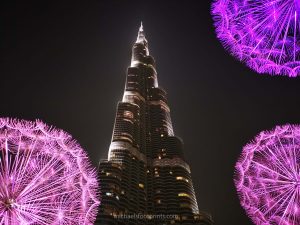 Now I am not really in to Football (or Soccer for the Americans), but I love how they followed the world cup here in Dubai. 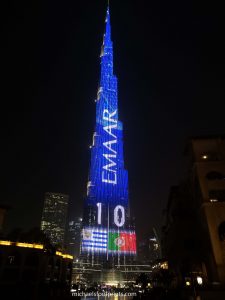 Unfortunately there was not much time for any other sightseeing because of absolutely incompetent people, who came together to form the “Total Freight International”.
We had unfortunately hired them to import the bikes for us to the United Arab Emirates with our carnet de passages.

They even promised me they would handle insurance. In any case they did nothing. After two days of calling them and hearing “yes, the package has arrived… we are in customs with it” and all the sudden getting an e-mail ” we cannot get insurance for this. It is not possible” we at some point had to take matters into our own hands and go to the customs at the airport. I spent the entire day talking to these people. Luckily, one of them, was keen to help us (which the previous workers had not been).

The main problem remained: insurance. They simply would not let us load the bikes on a pick up truck and drive them to the port to get on the ferry.

So this one helping worker made some calls and did find somebody who would insure us. It was ridiculously expensive, but we had run out of options.

After 5 o’clock in the evening the workers from Total Freight must have wanted to go home, and magically all appeared in the customs office. This really didn’t make anything better. 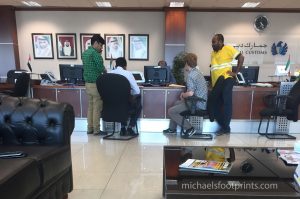 I spent the whole day in this chair, besides the hours that we spent in the insurance office.

Then they even wanted taxes from me, even though the whole idea of a carnet de passage is getting through tax free. I managed to make the guys from Total Freight pay this one, becaue they hadn’t done their work and I shouldn’t even have been there anyway. Of course when they had to pay it, the price magically sank by 75 percent…

Anyways we finally freed our bikes from customs. 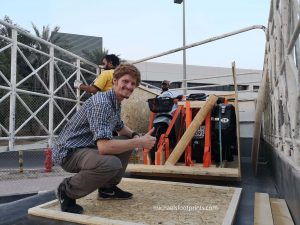 We got to spend the evening on a parking lot reassembling the bikes, reconnecting the battery, reoiling and packing the bikes. Once again we were quite lucky to have small bikes, as we literally had to lift them off the truck. The people from Total Freight had failed to plan for this problem. Say like to organize a ramp or something. 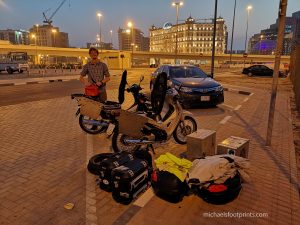 In any case we managed to get them on the ferry to Iran the next day. 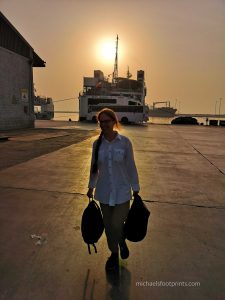