This post is about the first part of our ride through Iran, mostly about the places we visited and the people we met. I will also be writing an article with some basic travel tips in separate posts.

The ferry from Sharjah (United Arab Emiratres) to Bandar Abbas in the South of Iran is a very pleasant ride. The prices are high for us foreigners and are only slightly negotiable, but we get treated like VIP guests.

We arrived in Iran early in the morning and went straight to the immigration office. It seems that everyone else who takes the ferry goes to Dubai to buy tons of goods to sell in the bazars of Iran. So when we showed up with two small bags everybody pushed us to the front of the line so we wouldn’t have to wait while they had their many bags x-rayed. Very kind people.

Getting the passports stamped was no problem. Getting the bikes through customs would be a bigger deal, unfortunately.

Luckily a big man showed up who didn’t speak a word of English. He handed me his cell phone. His son explained to me in fluent English that he would help us import the bikes for 40 Dollars each. Money well spent!

We spent most of the day running around the port collecting stamps and signatures until we finally got the bikes out of customs. There was nothing terrible about these customs like in Dubai, it simply seemed like there were many people on pay roll in this port whose job it was to sign a paper someone else had printed and yet another person had stamped. There were minor problems with insurance, but I will be writing about this in the tips blog.

We then got invited to stay at our brokers home. His family was more hospitable and kind than any westerner could begin to believe. The next day his son even came to town with us to help us get a SIM card and try to get money from ATMs or Banks (a big problem in Iran, bring cash for the whole trip!!)  As we couldn’t get any money after many attempts with eight different cards we figured our fate would be to make the trip on 1 million Rial per day which meant the equivalent of 10 Dollars per day (in 2018).

Amazingly for gas, food and accommodation we needed even less then this, but more on this later.

The next day we decided to make our way to Shiraz. We prepared our bikes under the scorching sun. We would spend most of the next month driving through the desert, but none of that compared to the heat in Bandar Abbas. Our broker escorted us by car to the city limits and pointed us off in the right direction for Shiraz. He even kissed me good-bye, a custom typical in Iran for men, which I was not aware of at the time. 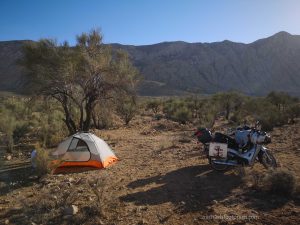 Shiraz was a long drive away and we were not in too much of a hurry. We slept in the tent in the middle of nowhere and got our gas from small shops on the side of the street in PET-bottles, because there were not many gas stations. Locating the shops with gas is as easy as this: stand in the town and yell “benzin”, somebody will point you in the right direction. “Gas” however does not work at all, as they use a lot natural gas in Iran.

Shiraz
Shiraz has many attractions. It is perticularly well known for the pink mosque and for the tomb of Hafez (a very famous Iranian poet). 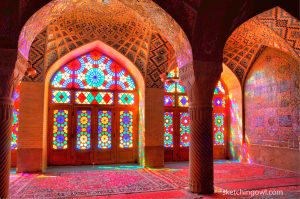 While the Pink Mosque is certainly worth a visit in summer, it is a bit of a letdown after seeing pictures from winter mornings on google. 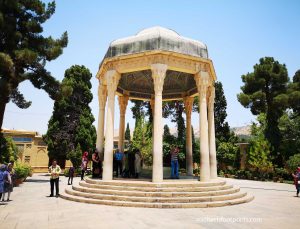 And the tomb of Hafez is a very nice place to visit, as it has a very calm and relaxing atmosphere.

I must say however, that the best thing about Shiraz is the friendly people who will always want to talk with you, invite you to their house or simply take a selfie with you. As far as the cities go Shiraz seemed like the friendliest to me. This is however not counting the countryside where Iranian hospitality takes on yet another level to itself.

People in Iran
In Shiraz something happened that I would say describes Iran perfectly. Martina was wearing her head scarf (hijab), as women in Iran must. While we were walking along it got blown off her head by the wind, so it fell on her shoulders. It took less than two seconds for an older man walking next to me to grab my elbow, point at her and signal that she should put it back on her head. In his defense, he was quite friendly about it.
Then as this man walked away a second man grabbed me by the elbow and signaled that we shouldn’t care about the first man. He pointed at him and said Khamenei-crazy. (Khamenei being the religious leader of Iran at the time, not to be confused with Ayatollah Khomeini). In Iran there are many liberal people who are huge fans of the West and the USA. Many of these people hate their government, speak English and some even wear t-shirts with US-flags on them and want to talk about all sorts of things with you from politics to income. There are however, also many conservative people backing the government, they just aren’t so noticeable for foreigners, as they don’t talk with us. I guess the amount of conservatively dressed women is an indicator of how many conservative families there are.

Iran is an amazingly cheap country to visit, except for hotels. Many of the Iranians that hosted said that we should make a couchsurfing account and get through Iran like this to meet people and make the trip on 10 Dollars per day. As we had made good experiences with staying at locals, we decided to give it a chance. It was a great decision and we met many interesting people who spoke English, German or French.

Near Yazd there is a historical site called Persepolis. It is from ancient Persia. Not much needs to be said, except for that it should be on everybody’s bucket list.

Right next to the entrance to Persepolis there is a guarded parking (cost something around 2 Dollars per person). Here camping is allowed, and lot of Iranians do spend the night here (this is very common near touristy sites). 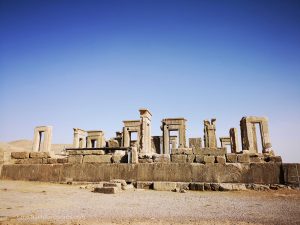 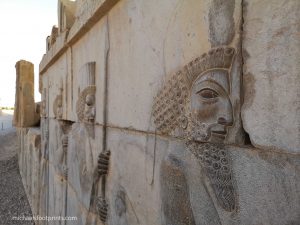 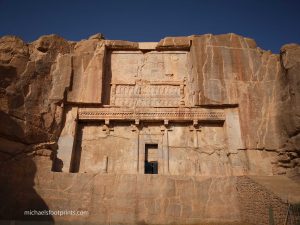 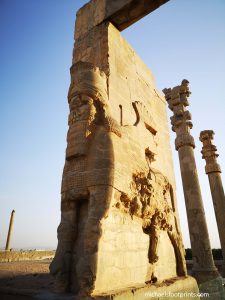 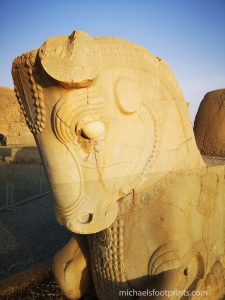 Gifts in Iran
Iranian people absolutely love tourist and will give them many presents for free. We were offered cheese from someone walking by, while we were sitting in a restaurant. Stopping for gas usually meant getting some tea as a gift. We even got some grapes and cucumbers from one gas station worker and a water melon from a mechanic. We never paid toll fee on big highways, they waved us through (motorcycles on highways are a bit of a problem. Check the tips post for info) and once we even got waved through a pay toll for a touristy village (Iranian tourists, we never saw foreigners there). There is however a custom called Tarof. You may only accept things after they have been offered three times. Usually they will make it clear that you should take the gift by literally putting it against your chest forcing you to take it. I can not stress enough how friendly these people are.

This was part 1 of our ride through Iran. Don’t forget to continue reading 🙂