Home » Overland '18 » Driving through Georgia – the country, not the state
Georgia | Overland '18

I usually don’t write much about history, but this brief wrap-up is quite important to understand Georgia as it is today.

Georgia is an old Christian country in the Caucasus. Since its golden age in the medieval it has had been conquered by many great powers such as the Mongols, the Ottomans, the Russian Empire and the Soviet Union. Since the collapse of the Soviet Union it has become a very Western oriented country. Continuing territorial conflicts with Russia have lead to Georgia having two de facto independent territories named Abkhazia and South Ossetia.

Matsimi-Balakan Border
The friendly Georgian border workers were a pleasant sight after the amazingly uptight Azeri officials. Getting our motorbikes into the country was possible within a few minutes and insurance was not much more difficult then that.

Tblisi
We drove straight to Tblisi and stayed at a Swiss expat’s place. We usually try our best to meet local people, but speaking Swiss German for three days was a nice change for us. If it weren’t for the food, I could have fallen for it as a city in eastern Europe. And another nice thing was that many people spoke English or German – except for the taxi drivers. Like in all the countries in the Caucasus everybody spoke Russian.

There are many amazing churches in Georgia, and there are many deeply religious people in this country. I have been to many different orthodox churches and the way the Georgians worship – like kissing statues feet, praying in front of all the paintings and praying while walking around – is by far the most devoted I have ever seen.

For all those who think that women covering themselves is something only found in Islam, do note the woman in the black cloak with a hood. And no, one could not see her hair when looking at her from the front.

While a very traditional religion may be an important part of Georgia’s cultural heritage there is also a thriving modern scene, like impressive Graffities in the underpasses. 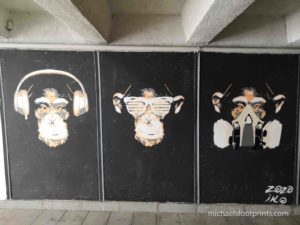 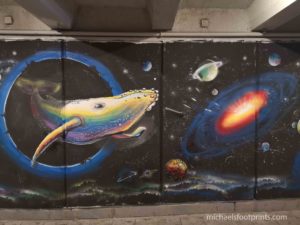 This particular underpass is definitely worth visiting. It goes beneath the Nikoloz Baratashvili Bridge.

Kazbegi
We had intended to drive our motorbikes up to Kazbegi near the Russian border. We noticed that this would be a two-day trip for us with the Hondas (and plus it was likely to rain). So we decided to take an organized tour. Finding a good price online was a bit of a pain. We eventually found that City Sightseeing Tblisi offers this trip for around 25 USD. Then an extra 15 Georgian Lari come on top of that for a quick off-road taxi. As this was not written online we managed to get our money back for this part. Everyone else had booked in the shop and they had been informed. I really hate these kind of things, but the rest of the tour was fine.
We stopped on the way up for multiple churches and viewpoints.

After a long drive we finally arrived at the church we had come to see.

I must say it looks more impressive in real life. The clouds and unfortunate lighting made it hard to get a good picture.
We went into Armenia from Georgia and reentered a few days later. Note that all Armenia-Turkey borders and all Armenia-Azerbaijan borders are closed.
We left Georgia at the Bagratashen-Sakdakhlo Border and reentered at Zhdanovakani-Bavra Border. The process in leaving and coming back was no problem at all. But the roads on the Georgian side of the Zhdanovakani-Bavra Border are an absolute nightmare. There were potholes longer than our motorbikes and at least a foot deep. I strongly recommend not to use this border.

Vardzia
Vardzia is a city of caves in southern Georgia. A good part of the city was built 800 years ago and there is even a monastery on the inside.

When it was time to leave Vardzia and drive to Batumi Google Maps simply would not show the stretch we drove in this picture. 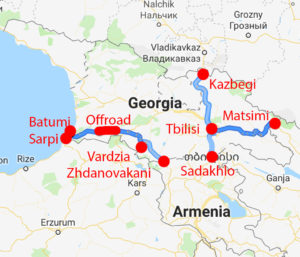 Instead it would make a 300km detour up north. No matter what stops we added in between it simply would not go over the patch I painted in red.
So we asked some locals if it was “driveable”. They all agreed: “possible with motorbike”.

It was a very scenic stretch to drive but it was serious off-roading and we had an average speed of only 20 km/h (12.5 mph). 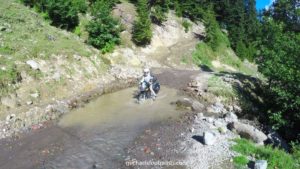 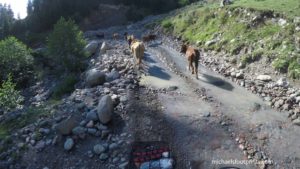 Interestingly Google Maps now does recommend this route. I wonder if that has to do with the fact that we did it with the GPS running 🙂

Batumi
Batumi is a city by the Black Sea with a very interesting architecture. 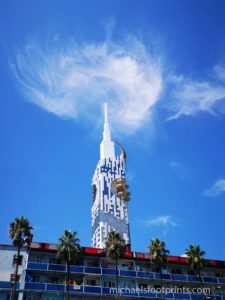 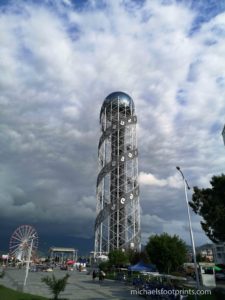 But to be honest after all our sightseeing and all the driving in the desert we decided to have a nice and relaxing day at the beach.

When I finally got off my sun chair and into the water, I all of a sudden found myself surrounded by snake heads swimming around me. So I slowly swam back to the beach and did not go back in for the rest of the day (as I have no idea what species of snake they were). I deeply regretted not having my goggles with me 🙁

We left Georgia to Turkey. The town on the Georgian side is named Sarpi and the one on the Turkish side is Sarp. So it’s the Sarpi-Sarp border. How I love that name.

Sarpi-Sarp Border
This border was just as easy as all the other ones we had experienced in Georgia. When we arrived at the border a huge line of waiting cars awaited us and we were a bit worried that we would be at the border forever. Luckily all the Georgian and Turkish border workers kept telling us to pass the standing cars. It took us about 30 minutes to enter Turkey and I am sure the cars took around 3 hours.

Travelling in Georgia was very easy and not very cheap. While Georgians are not unfriendly, they certainly have the typically European distance to tourists, which I always find a bit sad. Especially just after having been in Iran.
I would recommend Georgia to everybody who likes to travel in Europe and would like to go a bit further without leaving any comfort zones.
Oh, and did I mention the beautiful landscapes? 🙂