This post is about our ride through Azerbaijan, mostly about the places we visited and the experiences we made. I will also be writing an article with some basic travel tips in a separate post.

Travelling to Azerbaijan gives you the possibility of seeing mud volcanoes, drinking natural burning water and visiting the thriving city of Baku. We traveled here without high expectations and ended up loving every minute we spent here.

Astara Border
We entered Azerbaijan from Iran at the Astara border crossing. The towns on both sides have this name, so it should be called the Astara-Astara border. Kind of weird, eh?

As I mentioned in the previous article the Iranian side was typically friendly and there were only two uniformed men at the end who checked our stamps and that was it.
On the Azerbaijan side we thought we had entered the worst police state ever! Dozens of uniformed people and young men in military pants and black t-shirts were searching through all the cars with big barking dogs. And all of them gave us grim looks. It was a bit freaky.
Getting through customs was a piece of cake though. They scanned our carnet de passages, checked our passport multiple times (probably for Armenian stamps or Nagorno-Karabakh visas). Then they read our e-Visas and stamped our passports. There are a few formalities that are important, they will be in the travel tips blog. The most important thing is to keep every single paper they give you at the border, including the now used e-Visa. You will need all of these things when leaving the country.

Once we got out of customs everything calmed down massively. Azeris are very friendly, easy-going people and none of the police within the country gave us a hard time. Once we stopped at the police next to the highway ramp to ask if we were allowed on the highway with our motorbikes. Before simply saying yes, he wanted to shake my hand. The same thing happened at all the checkpoints we drove through. By the way, there are police everywhere in Azerbaijan, especially in the south. And they pull over cars all the time. It is not the country to go speeding.

Yanar Bulag Fire
One of the best things to do in Azerbaijan is to drink natural burning water straight from the spring (or the fountain they build around it). This attraction is right after Astara and is not on google maps at the moment. The coordinates are 38.491882, 48.831767. We found it by asking locals for directions. It turns out they all know it as hundreds of them come every day to fill canisters of this water and take it home. They believe it to be very healthy.

Don’t believe it. It tastes of sulfur and there’s simply no way it’s good for you. I had diarrhea for the rest of the day. But it was really worth it 🙂

Lankaran
We spent our first night in Lankaran, which is one of the bigger cities in Azerbaijan. While there is nothing special to take photos of, it has a great atmosphere and you can get everything you need from SIM-cards to US-Dollars (details will be in the tips blog).

The south of Azerbaijan is quite rural. Somehow not at all what I expected after googling it, but the rest of the country is quite different – more on that later.

An attraction near Lankaran are the hot baths in the middle of a forest. They built little houses and pools around hot springs, that you can rent for a certain time period. So no need to bring a bathing suit 😉
The down side is that the water smells of sulfur and there are no showers for after the swim.
This also is not on google maps. The coordinates are 38.765598, 48.742620. The ride there is amazingly bumpy and I would hardly recommend driving a normal car there.  No map has the street that goes there, but you will find the way with some intuition.
By the way in Lankaran there are plenty of taxi drivers and they all know the place. We of course went there with our motorbikes.

In Azerbaijan we almost got run over by taxis multiple times. So keep an eye out for them if you are driving.

Qobustan
Watch out, there are multiple Qobustans in Azerbaijan and also one Gobustan. The one I mean is south of Baku by the Caspian Sea. And to make things worse many travel guide books call this plase Gobustan.
Qobustan has a place called Qobustan Rock Art Cultural Landscape. Here you can find amazing rock formations and ancient petroglyphs. And yes, I had to use google to find that word in English 🙂
The oldest of these rock engravings dating back to the 12th century BC!

And as if rock formations and petroglyphs were not enough of a reason to visit this amazing place, it is also home to mud volcanoes – something I find weirdly fascinating. 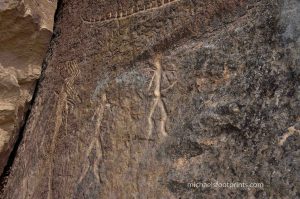 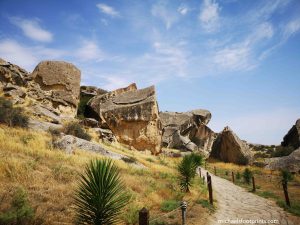 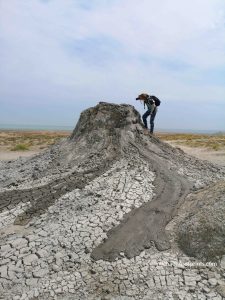 There are many mud volcanoes in this region on google maps, but the only ones that seem to be accessible by vehicle are at 39.996514, 49.403175. As they are hard to get to (off-roading) getting one of many taxi drivers in Qobustan village is probably the best idea. If you are trying to save every cent – like us – you might consider driving your motorbike there. I recommend coming off the highway from the south. As the off-roading part is much shorter and easier.

Baku
A very developed and beautiful city, that should be on every traveler’s bucket list.
Not much needs to be said about this city. Just enjoy the architecture!

At night the towers are lit to make a fairly impressive light show (although it’s nothing compared to Dubai).

The best viewpoint to see this (for free) seems to be the point in google maps called “Baku Panoramic view” in the Upland park. Coordinates: 40.357424, 49.830169. If you have some extra cash getting into the radio tower might be worth looking in to.
Other buildings with special designs include a mall (being built) and the carpet museum. 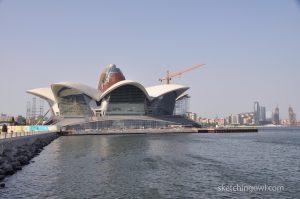 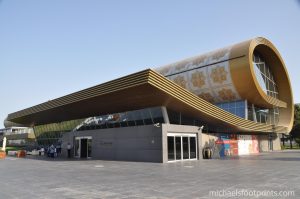 The ride to Sheki
Once we left Baku and started heading westwards to Georgia the landscape changed multiple times.
Once it even felt like we had landed in Mongolia.

And as we were back in more rural areas (but completely different to the south), there were more soviet vehicles again. 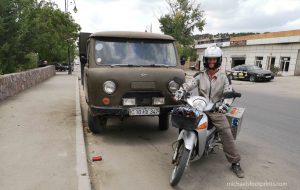 I fell in love with these ugly ducklings and came up with the idea of buying one in Eastern Europe and driving it to Vladivostok. Stay tuned for the adventure!

Sheki
Sheki has many sites worth seeing. We decided to visit the Palace of Shaki Khans. I can really recommend this amazing place, but unfortunately no photos are allowed inside. So google it, if you are interested.

Just before reaching the border we decided to have lunch in a little restaurant. When we wanted to pay, the owner of the restaurant took my wallet out of my hands, closed it, laid it on the table and said: “you are my guest”. Azeris are very hospitable people.

Matsimi-Balakan Border
Once again the Azerbaijan border officials were a far cry from friendly. I took a picture of our bikes with the border gates in the background. Then I heard a young man shouting “no photo!” and “delete photo!”. He wanted to see my screen while I erased it. No big deal, but a bit of a surprise, as you could literally only see a gate on the picture.

On the other side we met the very friendly Georgian border officials who were much fewer in numbers and did not have half the traffic waiting to get into the country as the Azerbaijan side.